Where It All Began

Back in the early 80’s Mark’s father came home with an old chainsaw that was given to him from a friend. They lived on an old farm with a lot of wooded land in abundance of hardwood trees suitable for firewood. Mark and his father began to cut trees and processed them into firewood to make some extra money. Mark quickly learned the skills of falling trees and the proper use of a chainsaw. Over the next few years Mark developed a substantial customer base for his sales. At this time he was working for a construction company as an assistant engineer and chief surveyor when one day there was a problem on site in which a tree was in the way of their pipe crew and it needed to be removed immediately. Marks supervisor asked him if he could remove it, at that time he replied that it had to be climbed which is something he has witnessed many times but had never attempted himself. When Mark told him he was willing to do it but needed the gear, he sent him to the supply house to purchase a set of climbing spikes and a lineman’s belt. After Mark returned, he climbed and removed the tree successfully. A neighboring resident then approached Mark and asked for an estimate to remove a tree on his property. So it all began. 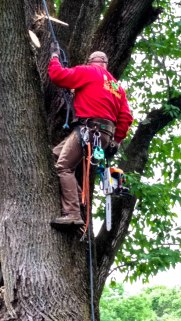 From this point Mark quickly grew but remained it as a side job, building a customer base and a reputation. Mark’s father always stressed to do the cleanest and most professional job possible, “LIKE WE WERE NEVER THERE!” He was right. Mark built their reputation on that. Before he knew it he was buying equipment and trucks and working seven days a week. In 1987 it became apparent that this was now a full time job, so he made it a legal business and got a certified trade name (M.T. Tree Service) and all the tax numbers and insurance to go with it. Mark then operated as a sole proprietor, hired employees and never looked back.

Mark continued to grow rapidly self-educating as an Arborist, learning all the newest equipment and techniques, and improving to provide the best services for their customers. As the company expanded so did the clientele. Mark began building relationships with other contractors, builders, landscapers, property management companies, and municipalities who would use their services and recommend them to their customers.

In 1995 Mark incorporated with his wife, making M.T. Tree Service Incorporated. Soon after that Mark began taking courses as an Arborist to improve not only his knowledge of techniques and gear, but also his knowledge of trees and most importantly, safety. M.T. Tree Service Inc. continues to grow and improve in the same manor while keeping the company to just one crew. Mark is still oversees and works on every job, never forgetting their motto, “like we were never there.”

Today M.T. Tree Service inc. owns and works with some of the most state of the art equipment providing expert and experienced services to their customers. They now work with property management companies and provide services on over 50 commercial properties. Most of all they have a residential customer list that seems endless. Looking ahead they plan to continue to provide the same excellent service to their customers while maintaining to improve with all the latest technology provided to their industry and education to get the job done as efficiently and cleanly as possible so we can keep costs down and satisfy their customers every wish. 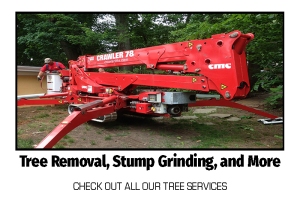